While the amendment "officially" abolished slavery 1865, it STILL contains a loophole that allows people to be enslaved "as a punishment for crime whereof the party shall have been duly convicted." Being found guilty of such minor "offenses" as "not showing proper respect" or "joblessness" could mean years of involuntary servitude. It's the reason we have the Sugar Land 95.

Why?
Legal scholar and author Michelle Alexander writes: "After a brief period of progress during Reconstruction, African Americans found themselves, once again, virtually defenseless. The criminal justice system was strategically employed to force African Americans back into a system of extreme repression and control, a tactic that would continue to prove successful for generations to come.

"States put prisoners to work through a practice called “convict-leasing,” whereby white planters and industrialists “leased” prisoners to work for them. States and private businesses made money doing this, but prisoners didn’t. This meant many Black prisoners found themselves living and working on plantations against their will and for no pay decades after the Civil War," Alexander writes.

And according to History.com: "Scholars, activists and prisoners have linked that exception clause to the rise of a prison system that incarcerates Black people at more than five times the rate of white people, and profits off of their unpaid or underpaid labor.

This loophole has not gone anywhere... even after 157 years.

That's why S.O.J.E.S. is joining forces with legislators and groups seeking to eliminate this loophole.

"Lose the Loophole," a petition-signing and informational event, will be the centerpiece of S.O.J.E.S.'s observation of Juneteenth (Sunday, June 19) in 2022.

"We want to be a partner in the effort to end this unfair and unjust loophole, which is affecting lives of people even to this day," says Robin Cole, S.O.J.E.S. president. "The Sugar Land 95 were caught in this unfair exception clause. It's 2022. It's time for us to lose the loophole."

Oregon’s U.S. Senator Jeff Merkley and Congresswoman Nikema Williams (GA-05) have introduced the Abolition Amendment, which would strike the ‘Slavery Clause’ of the 13th Amendment that allows slavery to continue in the United States.
​
Plans for the Lose the Loophole event are underway. Please stay tuned for details.
PAST EVENTS

November 2021
Award-winning historian and author was keynote speaker at S.O.J.E.S.'s
A Day of Remembrance in February 2022
Matthew J. Mancini, Ph.D., author of the book One Dies, Get Another: Convict Leasing in the American South: 1866-1928, will be the keynote speaker at A Day of Remembrance, S.O.J.E.S.'s Black History Month community event commemorating the fourth anniversary of the discovery of the Sugar Land 95.

A Day of Remembrance will be held 11 a.m. to 1 pm., Saturday, February 19, 2022, at Fluor Corporation, 1 Fluor Daniel Drive, in Sugar Land, TX. The event is free and open to all.
​
"We are delighted to have professor Mancini share his extensive knowledge of convict leasing in the South and Sugar Land with our community," says Robin Cole, President of S.O.J.E.S. "And the fact that professor Mancini and others will join us during Black History Month and on the exact day four years ago that the world learned of the Sugar Land 95 is especially significant."

On February 19, 2018, the first of the remains of at least 95 victims of convict leasing in Sugar Land was uncovered by a backhoe operator helping to construct the James Reese Career and Technical Center, a Fort Bend Independent School District (FBISD) technical high school.

Since the discovery in 2018, a variety of efforts have begun to learn more about - and properly honor - the Sugar Land 95. These events include a news conference by S.O.J.E.S. and community leaders, a large Juneteenth Celebration by S.O.J.E.S. in 2021, and the recently announced plans to create an outdoor learning space and Sugar Land 95 cemetery enhancements by the FBISD (see story below).

Mancini's speech will focus on one of the most exploitative labor systems in America’s history. His book describes the seemingly uneven enforcement of convict leasing across state lines, which bound the South together for more than half a century in reliance on an institution of almost-unbelievable brutality.

In addition, Mancini's book describes the prisoners' daily existence, profiles the individuals - specifically, Edward Cunningham and Littleberry Ellis - who leased convicts, and also reveals both the inhumanity of the leasing laws and also the centrality of race relations in the establishment and perpetuation of convict leasing.

He also has served as a visiting professor at Rice University.

The recipient of several national teaching and scholarly awards, Mancini earned his Ph.D. from Emory University and an B.A. in English from Fordham University. 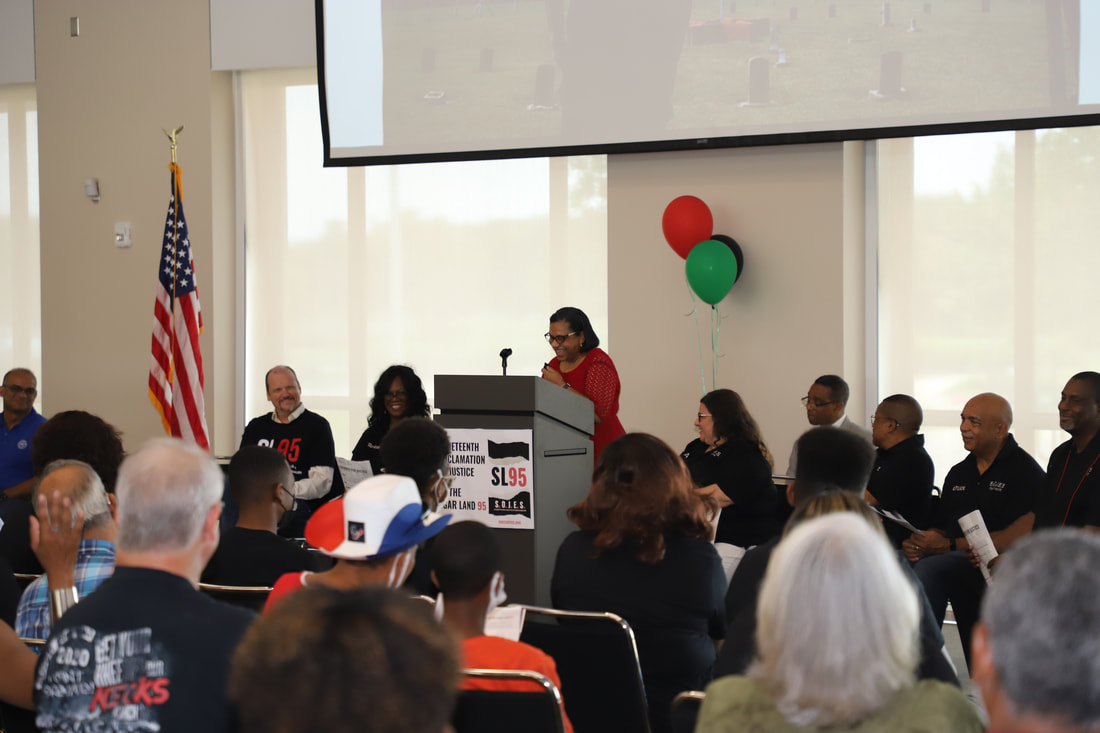 The two-hour tribute – A Juneteenth Proclamation for Justice for the Sugar Land 95 – was held June 19, the first national observance of “Juneteenth.” Juneteenth marks the day in 1865 when Texas slaves learned they were officially freed two years after the signing of the Emancipation Proclamation.

Khambrel Marshall, KPRC-TV 2 meteorologist and host of Houston Newsmakers, served as the emcee to a standing-room only crowd of more than 250 attendees from across Fort Bend County and Houston.

S.O.J.E.S.’s included speeches from elected officials, community leaders, organizations, educators and supporters, as well as Marilyn Moore, wife of the late Reginald Moore, the former Texas Department of Criminal Justice (TDCJ) guard and long-time historian and community activist who sought to tell the truth about convict leasing in Sugar Land.

Robin Cole, president of S.O.J.E.S., announced plans to build a national convict leasing museum in Sugar Land to educate the world about the harrowing system of racial oppression that existed in Texas and throughout the South from the late 1800s to the early 1900s.

“The time has come to get justice for the Sugar Land 95, their unimaginable lives of forced labor, and explain why people should never again be subjected to such inhumane and cruel practices that benefitted only a few,” says Cole, a Sugar Land resident.

Together, we can be the Voice for the Voiceless.