The Society of Justice & Equality for the People of Sugar Land - S.O.J.E.S. -
​is dedicated to historic preservation and educating the community about the contributions of African Americans in the creation and progression of Sugar Land and Fort Bend County, Texas.

​This includes commemorating and memorializing the Sugar Land 95.
​ 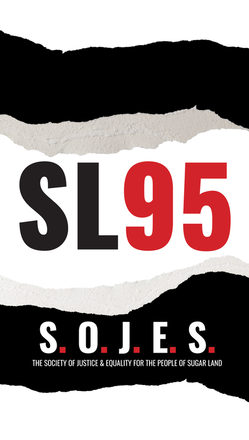 T﻿he Society of Justice & Equality for the People of Sugar Land (S.O.J.E.S.) is committed to its mission of educating the community about convict leasing and honoring the contributions of African Americans in Sugar Land and Fort Bend County. It is time to learn and heal.

We invite the public to a commemoration of the 5th anniversary of the discovery of the "Sugar Land 95," the 95 victims of convict leasing whose remains were discovered in a Sugar Land high school construction site on December 18, 2018.

Our keynote speaker is Alex Lichtenstein, Ph.D., noted author on convict leasing and American Studies Chair at Indiana University, to speak about the impact of convict leasing in the south and in Sugar Land, Texas. Other speakers and honorees will be featured in the program.

T﻿his is a FREE event event, but donations are gladly accepted at: https://www.sojesjustice.org/donate.html

S.O.J.E.S. is working toward creating a TRAVELING EXHIBIT on CONVICT LEASING, including the Sugar Land 95. We look forward to your participation and support.

The Society of Justice & Equality for the People of Sugar Land - S.O.J.E.S. - believes it is important to become a necessary catalyst in propelling our community to bravely confront the unknown truth about our past local history of racial oppression and exploitation from slavery to convict leasing to segregation, through a creatively and cohesively proposed organized collaborative effort to create an educational center and museum (with both indoor and outdoor learning exhibits). We call this The Sugar Land 95 Experience.