Had it not been for the construction of a new high school in Sugar Land, Texas, the world may never have learned about  the Sugar Land 95. Today, the term is internationally synonymous with the dehumanizing, long-overlooked and unfathomable system of modern-day slavery known as convict leasing.

The Sugar Land 95 refers to the remains of the 95 men - and one woman - unearthed by a heavy machine operator on February 19, 2018, on the site of the James Reese Career and Technical Center in the Fort Bend Independent School District (FBISD). The discovery became a daily horror story. With each turn of soil, new human remains were uncovered and promptly reported by local news media. The number of bodies discovered grew weekly from an initial few dozen to the current estimate of at least 95.
​
As the remains were uncovered, a myriad of questions began to surface. Who were these souls? What took place here? Most people in Sugar Land never imagined that the callous, unceremonious disposal of human lives would be so shockingly exposed through modern excavation of a publicly funded school in an upscale, master-planned community.

Yet, one person knew.

Reginald Moore, a former prison guard at the Jester Unit in nearby Richmond, Texas, had warned of this gruesome possibility. The historian and activist fervently told FBISD administrators that since their property had once belonged to the Texas Department of Criminal Justice (TDCJ), it was highly likely that the remains of former convict laborers would be buried there. Moore, who passed away in July 2020, was correct.

​Sugar Land’s convict laborers were victims of larger economic system called “convict leasing.” This system used jailed individuals to do the work once conducted by slaves.

The circumstances that catapulted mostly African-American victims into the clutches of the TDCJ as laborers signified the start of this decades-long nightmare. Many victims/laborers were previously-freed citizens arrested through carefully constructed Southern laws called “Black Codes,” which jailed individuals for minor “offenses,” including unemployment, homelessness or for being an orphan.

In Sugar Land, these individuals were victims of forced labor who were “leased” from the TDCJ by sugar plantation owners - Edward H. Cunningham and Littleberry A. Ellis - to do the grueling work of harvesting and boiling down sugar cane before it spoiled.

Cunningham struck a deal with the State of Texas, where the state would lease prisoners to him and Ellis on a per capita basis ($3.01 a person a month). The agreement gave the duo full use of all prison facilities and property, including every inmate in the state, for a period of fifteen years. Cunningham and Ellis vastly increased their wealth, and Sugar Land was built on the backs of this system of victimization and oppression.

Victims of forced labor/convict leasing didn’t live long under this regime. Failure to meet any quota was met with a whip. As author and former TDJC inmate Bill Mills wrote in his autobiographical book Bill Mills: 25 Years Behind Prison Bars: “Nobody was relieved until he dropped in his tracks. The guards often said the men did not cost them any money and the mules did. That’s why there was more sympathy for the mules than for the men.” As a result convict leasing was frequently referred to as “a fate worse than slavery.”

S.O.J.E.S.’ goal is to educate the nation and world about the societal and economic conditions that lead to the racial oppression and exploitation of Black people in Sugar Land and across the south.

It is suggested that this effort to advance and change the narrative in truth telling take place through a museum and national educational center in Sugar Land, Texas. 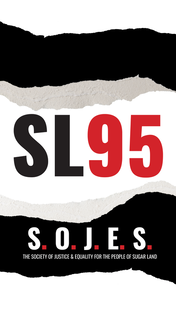